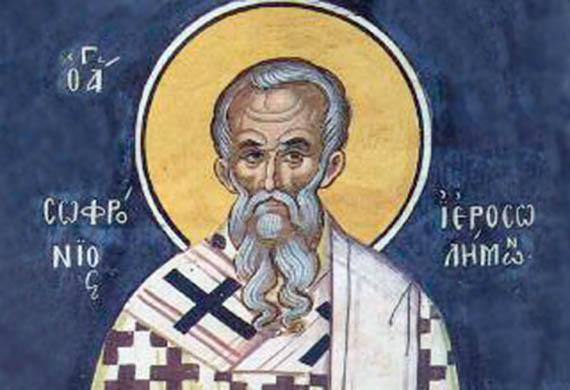 Agios Sophronios was born in Damascus, Syria around the year 580 AD. and he was the son of pious and virtuous parents, Plinthas and Myros. Because of his origin he is also called Damascene.

During his young age he visited the Holy Land and became a monk in the monastery of Abba Theodosios, where he connected spiritually with John the Calf, who practiced there, from whom he learned a lot. Accompanied by him, he visited Egypt, where he was associated with the circle of Saint John the Merciful and Rome.

John the Calf also died then (620 AD). Sophronius moved his remains to Jerusalem and, after burying them in the monastery of Saint Theodosius, returned to Alexandria. There he then contracted an incurable eye disease. He then visited the church of Saints Anargyri Kyros and Ioannou in Aboukir and was healed. He included this miracle in his praise to these Saints.

He then visited Constantinople in the hope of joining Patriarch Sergius I (610 – 638 AD) in his positions against the Monophysites and to express his disagreements against the unification plan, which the Patriarch of Alexandria Kyros of Phasidos (630 – 643 AD) was preparing to silence the controversy between Orthodox and Monophysites. But he failed and returned to Jerusalem disappointed.

When Agios Modestos died (see December 16), Patriarch of Jerusalem, Agios Sophronios, for his exceeding virtue, ascended in the year 634 AD. on the patriarchal throne of the Zionist Church. The situation was sad. Internally Orthodoxy suffered from the heresy of Monophysitism. Outside the Arabs surrounded the city of Jerusalem.

They already possessed Bethlehem and Saint Sophronius, unable, in December of the year 634 AD, to go there to celebrate the birth of the God-man, mourns. To restore some peace to his flock, he convenes a Synod and condemns Monophysitism. To repel the Arabs, he organizes the defense of the city. In the year 637 AD but he is forced to surrender the city of Jerusalem to the caliph Omar.

His writing is clearly and purely poetic. He distinguished himself mainly in the writing of idioms and the life of Saints Anargyri, John the Merciful and Mary of Egypt.

Holy Relics: The Kara of the Saint is located in the Monastery of Faneromenis Chiliomodiou in Corinth.